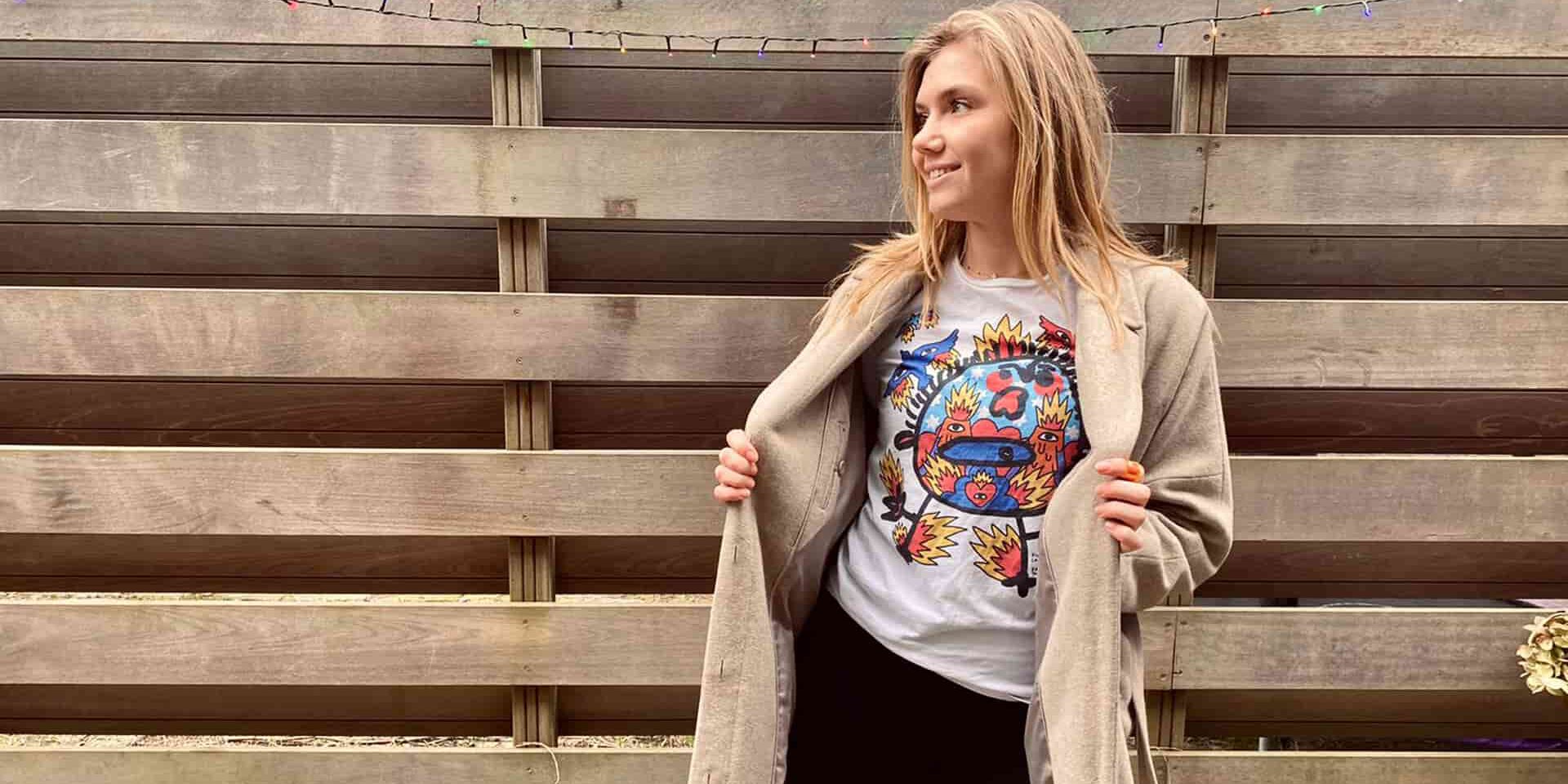 In our third installment of our mini-series ‘Faces of Face This’ we’d like you to meet Ilya van Haren. Ilya is our creative social media manager, taking care of our socials in a brilliant way. How Ilya was one of our first customers and became our social media manager twelve years later. ‘I find it important that Face This’s stories are shared as much as possible’.

We have known Ilya for a long time now. It was actually before Face This was founded in 2008 when we first met with her. ‘She was like Pipi Longstocking (Dutch: Pipi Langkous): she just tried things and went for it. She was, and still is, a bad ass girl and a sensitive chick at the same time,’ says Face This co-founder Jelka Priem who happened to be her teacher in 2008.

As Jelka was her teacher at the time we launched Face This in 2008, Ilya (and her mom) was one of our first customers. Ilya can recall these times vividly. ‘I remembered she told our class, including me, the situation over there on Lombok and that they were about to build an elementary school. How? With T-shirts designed by students from that particular school. I found that incredibly awesome,’ explains Ilya. ‘So, since then I follow Face This. And that has been already for 12 years now. I never stopped loving it!’

During the years, she obtained a good amount of Face This T-shirts. ‘I have a very sweet mother who really loves to buy every t-shirt, so I have quite a few! I think 6! But my favorite one has to be the one from the 2018 collection. The one where artist Ricardo Cavolo collabed with Hawannah (9) from Lombok. I think it’s such a playful t-shirt and it looks great on a nice pair of jeans!’

When she started to grow up and went travelling, Ilya decided to see that school on Lombok for herself. Eventually Ilya ended up seeing several Face This school projects in Indonesia but the first school she visited was the Duduk Atas school, together with her brother in 2017. Ilya recalls: ‘I can still remember that it was a long walk, because you could not easily get there by car. That school has been re-build by Face This and now many children enjoy going to school to get a proper education.’

For Ilya, this was a unique experience. And she only has good memories of it. Ilya: ‘It was a small school and it was very green. Under the guidance of Tomi (our local project manager on Lombok), we were welcomed with open arms by both the children and the head of the school. We had a small tour and handed out markers, exercise books etc. and we started drawing together. It was so nice to see that all these kids can now go to school. In the end we got fresh cane sugar! So sweet!’

Quite recently Ilya decided to join the Face This family and volunteer as our social media manager. Why does she want to spend her free time creating Insta stories and facebook posts for Face This? Ilya: ‘You’ve already said it: I have known this project for 12 years and over the years I have always wanted to make a difference, but that did not really get off the ground. Last year I was able to visit the other Face This school project on Lombok. This school was hit by the earthquake in 2018 and has been partly renovated, but there is still plenty to do.

Now that I’ve seen it with my own eyes, it has given me the motivation to contribute to this and that eventually ended up on being a social media manager for Face This.’ Besides her personal experience on Lombok, Ilya has a very creative mind and enjoys doing creative things. ‘I find it important that Face This’s stories are shared as much as possible with the rest of the outside world. And of course social media plays a very important role in this, a role that I can contribute to,’ Ilya explains.

As our social media manager Ilya will go and work with celebrities who want to raise awareness for our tees on their socials. Which celebrity we’ve worked with in the past did she like the most? Ilya: ‘First of all, I think all the celebrities who helped us share our T-shirts and stories are cool! But if I still have to choose, I’ll choose Jack Black. I love the film Gulliver’s Travels by him and of course Jumanji should not be missed. So cool that such a great actor has worn one of our T-shirts and shared it on his socials. Small milestone! And I hope lots of these kind of milestones will follow in the coming future.’

Want to see what Ilya is up to? Check us out on instagram and facebook and follow us to get her posts and stories on your timeline!

Some of our articles are being written by our editorial board. You can read them here.

Faces behind Face This: Arjan Klompe is a treasurer we can count on – and so much more
January 26, 2021

Faces behind Face This: Camiel Mulders, our Head of Fundraising & Sponsorships
January 21, 2021

How this Dutch bookstore is turning second hand books into stories of change
October 16, 2020

How our T-shirts help Lombok families survive during lockdown
August 25, 2020

Drawing with kids: 5 artists on how to get creative during lockdown
April 9, 2020

Filming in Indonesia: how this film maker created our videos
August 27, 2019